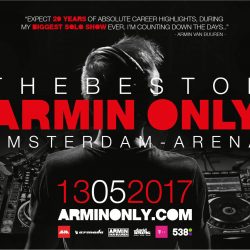 ARMIN HAS BEEN LEAVING HIS FANS IN SUSPENSE. HERE’S WHAT HE HAS TO SAY: Yesterday morning, Armin van Buuren released a video onto his social media to tell the world that he had a big announcement that he would be sharing with the world within the next 24 hours. The video featured clips of the legendary DJ back from when he was first declared as the No. 1 DJ of the

[wp_ad_camp_2] Armin Van Buuren has been one of the most successful people in the dance music industry til date. As a producer he has sold millions of records. As an entrepreneur he is a partner in Armada Music. And as a DJ he recently won the DJ Mag number one DJ award for the fifth time. So we are delighted to have him for an interview. [wp_ad_camp_1] You were the